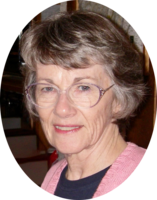 It is with great sadness that we announce the death of our wife and mother Beverly Jo Wakeman on May 7, 2022, from complications of Parkinson’s Disease. Bev was born in Vancouver, WA on July 1, 1936, to Harold and Betty Hill. She was the youngest of their three daughters. Beverly graduated from Vancouver High School in 1954, then attended business college and worked at Sparks in downtown Vancouver. She married the love of her life Roy Wakeman on December 31, 1955, and they had a wonderful adventure of over 66 years together. While she lived most of her life in Vancouver, she also spent time living in Minnesota and Kansas. Her very favorite home was the years they lived on the beach in Ocean Park after their retirement. Beverly spent most of her career working for Nabisco in both Portland and Minnesota. Roy and Bev enjoyed many years square and round dancing together. They joined with three other couples to form the Flutterwheels square dance club; they danced almost every weekend in Vancouver and then Minnesota. They also made several trips to the festival in Penticton, Canada. After retirement she pursued her quilting hobby, making beautiful quilts as well as teaching many people who became part of her extended quilting circle. She was one of the founding members of the Peninsula Quilt Guild, which still meets on the Long Beach Peninsula. Beverly is survived by her husband Roy of Vancouver, as well as three children: Lori Comstock of Vancouver WA; Gary (Susan) Wakeman of Altamonte Springs, FL; and Jody Muse of Wasilla, AK. She is also survived by three grandsons and a granddaughter, plus one great-grandson. She was predeceased by her parents and sisters Betty Mae and Barbara. A Celebration of Life Service is being planned for Saturday, June 11, 2022. Please e-mail Lori at loric@q.com if you wish to attend. In lieu of flowers please send contributions to a charity of your choice.